Welcome to the Front Page!

Well, this is embarassing...
So, I have planned to do a whole redesign of the website, but never ended up doing it. My thoughts were that well... I wouldn't bother updating the site until the redesign was done, to save me from having to rebuild every page. As you can see, that did not happen. Also, doesn't help that I've been dealing with anxiety, which has been quite paralyzing when it comes to making anything or talking to people. Since there's no point in dawdling any longer, I've decided to do a few updates here and there, gonna list them here:

As for what I was doing when I wasn't updating this site? Well, I've played way too much Risk of Rain 2, the game's hella addictive. Also, I've been working on a game with my boyfriend, but it's still quite early in progress! Hopefully I can dig myself out of this rut and do more stuff (I do want to, believe me), but we'll see.

Oh, this is a big update! If you've been following me on Twitter, you've already got a glimpse of what this update has to offer. The amount of changes is rather massive, so let's list them out:

Making the music player was quite a fun challenge, but I got there in the end! Sure, it's a bit messy, but it works and it's cool! I might do some other stuff in JavaScript sometime in the future, and if I do, you'll see it here.
This update had a little slip up, apparently files bigger than 100MB aren't supported, and also filenames shouldn't have spaces in them, but it should be all fine now.
Hope this new year has been treating you well so far! ^^

Well, four months without update! Well, I've been demotivated and been struggling with lack of confidence again, so I just didn't make anything in the past four months (well... apart from a game for a game jam). Sorry about that!
Anyways, this is a rather big update, so let's go through it:

Well, I'd say this wraps it up quite nicely. Anyways, in the past four months, I've gotten a cute Nijntje (better known as Miffy outside of Netherlands) plushie, a cute bunny necklace, a pair of new glasses (my new avatar was made before I got these glasses, so it's wearing my old glasses) and I've also been playing a lot of rhythm games and trying to get my boyfriend back into those. I mainly played BMS, but I've also played EZ2ON REBOOT : R, which is a really nice rhythm game with a lot of history behind it. It's extremely well optimized, and feels great to play as the timing is spot on and I have not experienced any lag or serious issues with it. When it comes to the songs from the game, I really recommend checking out Stay by Jeon Junkyu, Futurist by Andy Lee, Your Style by Dakick, Refresh by Kim Min and Hi-TECH Soda Machine by M0DRA1D (From TIME TRAVELER DLC). There's more tracks but I don't want to make it too long!
Anyways, it's gonna be Christmas soon, so I really wish you all a Merry Christmas, and a Happy New Year! Here's hoping 2022 will be a better year than this one!
Oh, and yes, the title of this update is a Freezepop reference. I really like Freezepop, what else can I say?

Another month, another update!
So, BE-MUSIC Special Selection 2020 was recently released, and I have contributed an extended version of Distance Fields and a remix of Kudomu Shirome's Leucochloridium to it. You can check them out by grabbing BMSS2020, or alternatively you can download the non-compilation masters (the versions included in the compilation were mastered to match other included tracks) from my music page.
In other news, my setup has gained an update! The M-Audio Keystation Mini 32 has been replaced with a Novation Launchkey 37 MK3. Check it out (Click for bigger size!): 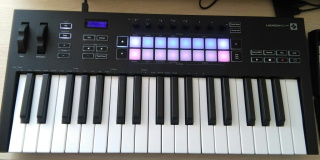 It's quite a powerful MIDI controller, it has knobs, pads, wheels and (obviously) keys, and a lot of really cool functions which seem to be geared towards jamming and improv, such as snapping played notes to specified key and scale, and a complex arpeggiator that can be tweaked to generate new melodic patterns. You can customize the knobs and the pads to your liking, so I made a preset that lets me use the drumpads with LMMS more reliably. However, it was mainly designed with Ableton in mind, so I'm missing out on some features designed specifically for that DAW. It does come bundled with a cut down version of Ableton (along with some other software), so I could potentially check that out.
I have taken it for a test drive by doing a small jam session. It actually works great for that, though I do lack the skills to do it well. It was definitely fun to play around with it! I still have to figure out how to incorporate it fully into my workflow so that it can be used to the fullest extent.
The last part of the update is updating the links page with a few updated descriptions and a link to Kudomu Shirome's website.

I am indeed finally living with my boyfriend! It's really nice here! Didn't expect it to work out considering the luck I've had in the past, but it actually did! Most of the time we've been cleaning up and preparing my room, which involved getting and building some furniture and moving things stored in the room somewhere else. Most of it has been done, so I finally have my own room with a really nice setup, which you can see here (click if for a bigger size!): 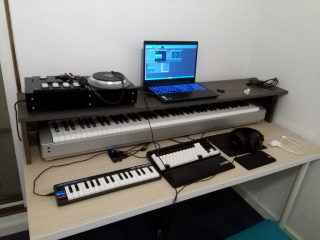 Yes, the giant MIDI keyboard is fully functional! And yes, this is the first time I put up a photo on this site. Things are changing quite a lot, aren't they? Things are getting better for me and I'm happy about that! I've also got some new nicer clothes I feel more comfortable in, so that is definitely a plus! I believe things can only get better from now on now that I am living here. However, I've still got plenty of work to do, one step at a time. There's no rush.
As for new content, I've finally made a proper full-length tune that's not tied to a BMS, and it's called Starlight Elevator! It's a really nice and moody blend of disco and ambient music which will make you feel as if you're watching the stars from an elevator rising to the sky! Make sure to check it out on my Music page! At one point I might make a BMS edit of it, but that remains to be seen.

Well, I planned to update the site last month but that didn't happen! Well, there's two reasons. First of all, I'm preparing to move out of my current country to live with my boyfriend, so we've been discussing and planning it all out and it's obviously stressing me out quite a bit, even if the end result will most likely be worth it.
The other part is a bit silly, but I've released a BMS semi-anonymously for the 2HDBMS event, so I waited until the event was over to put up my songs here on this site. Since the event has concluded, the songs are now up on my BMS songs page, so make sure to grab them! Oh yeah, the gimmick of the event was to make a BMS that would fit on a floppy drive when zipped. Pretty cool concept, and I think I did a good job with my tracks!
And yes, rectangle girl is only available in BMS form due to how it was made (most of the track was composed directly in the BMS editor). However, CYLENE STAR -STAGE 1: ZERO CITY- was made the way I usually make my music, so you can get the OGG or FLAC version of it here!
As for the website itself, I have fixed the date formats so now they're consistent on all pages (no idea how I messed that up, but it's fixed now), and I also made the difficulty level displays on the BMS pages a lot nicer when dealing with multiple difficulty sets that don't have the same amount of charts in them.

Good news! take-a-nobu is back with an absolutely relentless rave track! If you think you are ready to experience the EGORAVE, just click this link!
I've also took the liberty to fix the dates on the Other Music BMS page since they were in the wrong format. Oops!

I forgot that I contributed to BMSS2019 so uh... I added the remix I did for KidZ G's Gone West. You can find the non-compilation master here!

Eh, I don't think I can make good music anymore. Made a thing for PABAT 2021 and it wasn't good, so I didn't submit it. My hands hurt. Whatever. The BMS is here. Maybe you'll enjoy it, but probably not.
As for me, I'm thinking of retiring from making music considering that I can't make good music anymore. I really wish this wasn't the case, and that I had went out with something better, but oh well... Such is life.